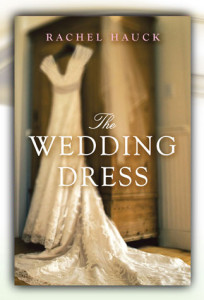 “Four brides. One Dress. A tale of faith, redemption, and timeless love.”

There is something that The Wedding Dress has and it’s not very common: two characters speaking a century apart; and there is no indication of connection or time separation, so a bit of suspense because some things do not fit, and you are wondering how and when the two characters are going to meet.

The idea of a wedding dress sewed with gold thread being passed on from generation to generation and fit for different shapes of bodies is also endearing.

However, at some point I was curious about the repeated mentioning of church and God and God’s Wishes and Will and everyone is going to church every Sunday at least… it turns out Rachel went via Christianbook.com and possibly this support got her published, just a hunch; anyhow, good for her if she found a niche and exploited it.

The rating on Goodreads is 4.25 stars out of 5 but I would go as far as 2.75, not more. It’s an okish book not badly written with a few points for some originality but that’s all. Rachel sometimes forgets (or maybe just takes advantage of the reader not being educated yet on the subject – which infuriates me, never take your reader for a fool, assume he/she is at least as smart as you are) that half of her characters live at the beginning of the twentieth century; the details are lacking or seem incongruent and many scenes would have been so much brighter with some research to back them up.

Conclusion: easy to listen and well read, nice chatter in the background sort of writing, “cheaper by the dozen”…