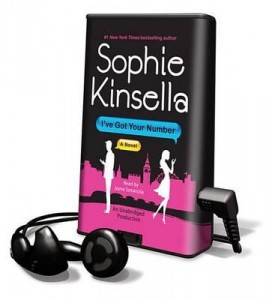 Title: I’ve got your number

“When Poppy loses her engagement ring and her mobile all in the same disastrous evening, it seems the obvious solution to make use of a phone she finds, by chance, abandoned in a hotel bin. But inevitably her life becomes entangled with the real owner of the phone, a high-flying businessman called Sam.”

I have read all Kinsella’s books. Even the ones before she started using the pen name Kinsella.

This one compares with the Shopaholic series. Finally. Bubbly funny, upbeat, anchored in reality, I could not stop listening. I have fallen asleep on it (that’s how far I took it) and got a bit sad when it ended, you do tend to finish a book a lot faster when you just have to listen to it. I saw comments about the footnotes being annoying: if you get the audio book (which is read to perfection- I listened to hundreds so I know) Jayne Entwistle reads them so cutely, I actually loved the idea.

The ending was not extraordinary but not bad either. This is not a book that will enrich your vocabulary, make you feel smarter or remember some essential truth that would guide your life choices, but it is a super amusing story that will make you feel lighter and happier. You will remember that everything can change any time and everything can get infinitely worse or better in a matter of minutes.

Chick lit fanatics, go for it!

If you intend to purchase this book (or any other book) from Amazon you can help AllWords by clicking on the link below to get to Amazon. There is no extra cost to you.

Madeleine Wickham was born in London. She did her schooling in Putney High School and Sherborne School for Girls. She studied music at New College, Oxford, but after a year switched to Politics, Philosophy and Economics. Wickham worked as a financial journalist (including for Pensions World) before turning to fiction.

While working as a financial journalist, at the age of 24, she wrote her first novel. The Tennis Party was immediately hailed as a success by critics and the public alike and became a top ten bestseller. She went on to publish six more novels as Madeleine Wickham: A Desirable Residence, Swimming Pool Sunday, The Gatecrasher, The Wedding Girl, Cocktails for Three and Sleeping Arrangements.

Her first novel under the pseudonym Sophie Kinsella (taken from her middle name and her mother’s maiden name) was submitted to her existing publishers anonymously and was enthusiastically received. She revealed her real identity for the first time when Can You Keep a Secret? was published in December 2005.

Sophie Kinsella is best known for writing the Shopaholic novels series of chick lit novels, which focus on the misadventures of Becky Bloomwood, a financial journalist who cannot manage her own finances. The series focuses on her obsession with shopping and its resulting complications for her life. The first two Shopaholic books were adapted into a film and released in February 2009, with Isla Fisher playing an American Becky and Hugh Dancy as Luke Brandon.

Twenties Girl, which was released in the UK in July 2009 was also published under the name Sophie Kinsella. The latest addition to the Shopaholic series, Mini Shopaholic, came out in September 2010.

Girls Night In (2004) (an omnibus of novels, along with many authors including Meg Cabot and Jennifer Weiner)