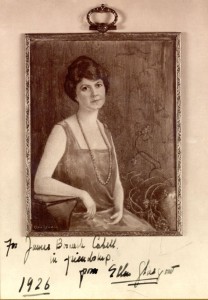 “Nothing in life is so hard that you can’t make it easier by the way you take it.”

“What happens is not as important as how you react to what happens.”

“A tragic irony of life is that we so often achieve success or financial independence after the chief reason for which we sought it has passed away.”

“Grandfather used to say that when a woman got ready to fall in love the man didn’t matter, because she could drape her feeling over a scarecrow and pretend he was handsome…”

“Most women want their youth back again; but I wouldn’t have mine back at any price. The worst years of my life are behind me, and my best ones ahead.”

“There wouldn’t be half as much fun in the world if it weren’t for children and men, and there ain’t a mite of difference between them under the skins.”

“No matter how vital experience might be while you lived it, no sooner was it ended and dead than it became as lifeless as the piles of dry dust in a school history book.”

“Mediocrity would always win by force of numbers, but it would win only more mediocrity.”

“Nothing is more consuming, or more illogical, than the desire for remembrance.”

“Ellen Anderson Gholson Glasgow (April 22, 1873 – November 21, 1945) was an American novelist who portrayed the changing world of the contemporary south. Born into an elite Virginia family in Richmond, Virginia, the young Glasgow developed in a different way from that traditional to women of her class.Due to poor health, she was educated at home in Richmond. She read deeply in philosophy, social and political theory, and European and British literature. She spent her summers at her family’s Bumpass, Virginia, estate, the historic Jerdone Castle plantation, a setting that she used in her writings.” (Wikipedia)