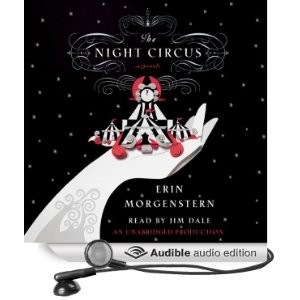 << Erin Morgenstern was raised in Marshfield, Massachusetts and studied theater and studio art at Smith College in Northampton, Massachusetts, graduating in 2000. In addition to writing, she paints, mostly in acrylics, including the Phantomwise tarot deck. She signed with Inkwell Management in May 2010 after being rejected by thirty literary agents, and sold her debut novel to Doubleday in September 2010; The Night Circus was published in September 2011. She has participated in National Novel Writing Month since 2003, and first wrote about what would become The Night Circus in November 2005. Morgenstern still resides in Massachusetts.

Morgenstern’s debut novel, The Night Circus, was published in September 2011. It is a phantasmagorical fairy tale of magic and romance set in an ahistorical late 19th century London. The book has drawn comparison with the Harry Potter series, as well as the works of Neil Gaiman, Ray Bradbury, Susanna Clarke, and Steven Millhauser; it is not aimed at young adults, but has been recommended for teens. The first printing runs to 175,000, and the rights have been sold in 30 countries;  Summit Entertainment has contracted the film rights. Jim Dale, who narrates the Harry Potter audiobooks, also narrates the audiobook of The Night Circus. Harvill Secker, the UK publisher for The Night Circus, contracted Failbetter Games to create an interactive browser-based puzzle game to accompany the book.

In an interview with the School Library Journal, Morgenstern describes the short, self-contained chapters as recapitulating the myriad tents of the circus, and the black and white with a splash of red motif as showing dangerous passion simmering just below the surface.>>  (Wikipedia)

Jim Dale was a great choice as he reads the book well, adding to the mystery and suspense with his deep-set tonality. I have no complaints there, maybe he sounds a bit old for the characters sometimes or better said, he sounds just as old for the young people as he does for the old ones.

The novel is refreshing. Coming after an array of boring dusty plots unworthy of me wasting even more time writing about them, The Night Circus makes you go back to better understand, rewind to catch the description of the context, so important as it many times gives clues to the mindset or personality of the characters.

It’s magic. The whole set, the location, the clothing, the game, the adversaries, it’s all magic. Two magicians are fighting endlessly through their students and the story is wrapped around one of these fights, where the competitors are trained from ages 6 and 10, one motherless, the other one orphan of both parents. Characters are being built in circles, just like the Circus, from afar to centre or from centre to afar, creating an illusion of the mind; as after all, it’s all an illusion, isn’t it? Nothing is completely clear-cut, or entirely explained, until the end when we get some explanations as closure.

You get used to people reading thoughts, past or future, cards giving you hints to decipher, age being irrelevant, mind gaining such control over matter that when the book is over you are left adrift, uneasy, puzzled and a bit sad: there is no raven following, no man without a shadow, no more musing over the fantastic circus with all its meticulously arranged tents, its fabulous clock described with such precision that you are surprised you cannot touch it when you extend your arm…

I was shocked to discover that Erin is one year younger than me, that she got thirty rejections for this novel and still went on submitting it, trusting herself and her talent. In an era where all famous artists, (be it musicians, actors, painters) or politicians, show runners, show hosts, fashion designers and tycoons of all sorts have their books written, published and becoming hits, it is beautiful to see that this can still happen. It means there is still hope for the likes of me.

Thank you Erin for this charming tale and for the beautiful ending topped with my favourite quotation from The Tempest:

“Our revels now are ended. These our actors,
As I foretold you, were all spirits and
Are melted into air, into thin air:
And, like the baseless fabric of this vision,
The cloud-capp’d towers, the gorgeous palaces,
The solemn temples, the great globe itself,
Yea, all which it inherit, shall dissolve
And, like this insubstantial pageant faded,
Leave not a rack behind. We are such stuff
As dreams are made on, and our little life
Is rounded with a sleep.” – William Shakespeare, The Tempest