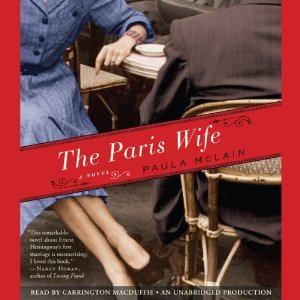 LA- and Seattle-based actress, Carrington MacDuffie came to audio books from a musical background as a singer and recording artist, responding first to the opportunity of reading poetry.

“Set during a remarkable time, the same period as Ernest Hemingway’s A Moveable Feast and The Sun Also Rises, Paula McLain’s The Paris Wife brilliantly captures the voice and heart of Hadley Hemingway as she struggles with her roles as a woman—wife, lover, muse, friend, and mother—and tries to find her place in the intoxicating and tumultuous world of Paris in the twenties.” The Seattle Times

“Elizabeth Hadley Richardson (November 9, 1891 – January 22, 1979) married writer Ernest Hemingway in 1921. She was born the youngest daughter to a St. Louis family. After Hadley fell out of a window as a child, her mother became overprotective and curtailed her activities from then on. As a young adult, Hadley nursed her mother during an illness that led to her death; a few months later she met Ernest Hemingway. They were married after a courtship of less than a year.” Wikipedia

The audio book is beautifully read, Carrington’s husky voice going well with the described circumstances: the smoking, the drinking, the old age… I enjoyed listening to this reminiscing voice, obviously professional, not irritating. The only comment I have: Random House Audio could have employed a man to read Hemingway’s chapters. There is not enough character punctuation in the book and Carrington does not change inflection, not modifying  tonality in any way to signal that we are listening to his thoughts and not Hadley’s.

For the content of the book read my review in the Book Review section.

Always Something There to Remind Me by Beth Harbison - Audiobook