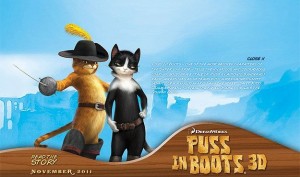 Master Cat or, The Booted Cat (early French: Le Maître Chat, ou Le Chat Botté), commonly known as Puss in Boots, is a French literary fairy tale about a cat who uses trickery and deceit to gain power, wealth, and the hand of a princess in marriage for his penniless and low-born master. The tale was written at the close of the seventeenth century by Charles Perrault (1628–1703), a retired civil servant and member of the Académie française. The tale appeared in a handwritten and illustrated manuscript two years before its 1697 publication by Barbin in a collection of eight fairy tales by Perrault called Histoires ou contes du temps passé. The book was an instant success and remains popular.

Perrault’s Histoires has had considerable impact on world culture. The frontispiece to the earliest English editions depicts an old woman telling tales to a group of children beneath a placard inscribed MOTHER GOOSE’S TALES and is credited with launching the Mother Goose legend in the English-speaking world. Puss in Boots has provided inspiration for composers, choreographers, and other artists over the centuries. The cat appears in the third act pas de caractère of Tchaikovsky’s ballet The Sleeping Beauty, for example, and makes appearances in other media.

Interesting how the movie reviews make no reference to all these details but simply call the Puss in Boots “one of the beloved characters of the Shrek Universe”.

The movie is full of symbols and 3D made a difference, it was enchanting to fly over the rooftops of old little houses, or watch the clouds from so close. Humpty Dumpty is also one of the main characters. I would call it a happy mix for your little ones. The plot, the chase, the colourful landscape, the comical heroes and circumstances make it fun to watch for grown-ups as well. Our nine year old enjoyed it, but the theatre was full of four year olds who did not understand the symbolic perspective and got bored and restless eventually.

And shh! I got really bored as well at the end, but  had to take one for the team!