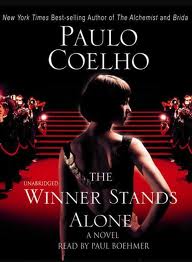 << Paulo Coelho (born August 24, 1947) is a Brazilian lyricist and novelist. He has become one of the most widely read authors in the world today. He is the recipient of numerous prestigious international awards, amongst them the Crystal Award by the World Economic Forum and France’s Légion d’honneur.

Paulo Coelho was born in Rio de Janeiro, Brazil. He attended a Jesuit school. As a teenager, Coelho wanted to become a writer. Upon telling his mother this, she responded with “My dear, your father is an engineer. He’s a logical, reasonable man with a very clear vision of the world. Do you actually know what it means to be a writer?” After researching, Coelho concluded that a writer “always wears glasses and never combs his hair” and has a “duty and an obligation never to be understood by his own generation,” amongst other things. At 16, Coelho’s introversion and opposition to following a traditional path led to his parents committing him to a mental institution from which he escaped three times before being released at the age of 20. Coelho later remarked that “It wasn’t that they wanted to hurt me, but they didn’t know what to do… They did not do that to destroy me, they did that to save me.”

At his parents’ wishes, Coelho enrolled in law school and abandoned his dream of becoming a writer. One year later, he dropped out and lived life as a hippie, traveling through South America, North Africa, Mexico, and Europe and started drugs in the 1960s. Upon his return to Brazil, Coelho worked as a songwriter, composing lyrics for Elis Regina, Rita Lee, and Brazilian icon Raul Seixas. Composing with Raul led to Paulo being associated with Satanism and occultism, due to the content of some songs. In 1974, Coelho was arrested for “subversive” activities by the ruling military government, who had taken power ten years earlier and viewed his lyrics as left-wing and dangerous. Coelho also worked as an actor, journalist, and theatre director before pursuing his writing career. >> (Wikipedia)

<< J. Paul Boehmer (born October 30, 1965) is an American actor best known for his numerous appearances in the Star Trek universe. He appeared in Star Trek: Deep Space Nine, Star Trek: Voyager, Star Trek: Enterprise as well as video games Star Trek: Klingon Academy and Star Trek: Bridge Commander. His other appearances include The Thomas Crown Affair and more recently The Good German. >> (Wikipedia) His reading of this book is beautiful, his voice is pleasant with the right touch of dramatic crescendo, contributing nicely to the complexity of the main character. He seems to be thinking that Russian and German accents are one and the same though, minor detail that probably most listeners will miss.

The winner stands alone focuses on the ‘super class’ and the futility of the daily struggle for fame and money. There is a main character, Igor, and then a few more important characters who sustain the book. The story takes place during the Cannes Film Festival, but it is approaching a rather back stage angle, where all the glamour is swept away by the constant race of the regular people in their well-fed desire to become famous, topped with the crazed fight of the already famous determined to maintain fame for as long as possible.

Igor, successful, driven Russian entrepreneur in the Telecom industry, is a dark, interesting character. The author is doing a good job in balancing his craziness with his sanity up to some point. The crescendo of Igor’s madness is swallowed though into the abyss of the masses, a much greater, way more dangerous insanity, pulsating, threatening to gulp everyone and everything: even the detectives are chasing fame, happy to have bait that would potentially propel their career or maintain their already gained illustrious reputation.

Igor, no matter how unbalanced, lunatic who murders easily in broad daylight, initially in order to reclaim his ex-wife, Ewa, is onto something far bigger when he pictures a future Cannes with so much more increased security, where celebrities will have no choice but to subdue to the ridiculous time wasting and nerves wracking demands of safety rules, and will eventually renounce coming to Cannes altogether.

The world of fashion, movie makers, glamour and richness is shown in its voracious light, where bodies and dreams altogether are stepped over and muddied without remorse, where the wheel is turning, the weak pay, the rich get richer and bones are occasionally thrown to the little dogs, an earlier version of an apocalyptic ‘Hunger Games’ if you will.

Initially I thought the ending disappointing, but thinking it over, had it been otherwise I would have thought it implausible, tweaked into one of the patterns we so indulge, consciously or not. It’s a typical Paulo Coelho book, puzzling, depicting reality in a rather shocking manner, shaking you in order to wake you up…

If you want to purchase this book or audio book from Amazon and support allwords.ca at no extra cost to you, please click on the link below.

The Island Beneath the Sea by Isabel Allende – Audiobook Review