The Island Beneath the Sea by Isabel Allende – Audiobook Review 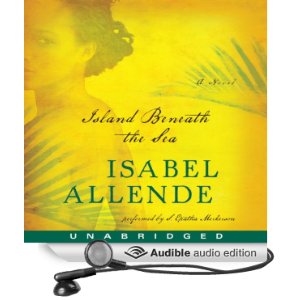 The Island Beneath the Sea is a 2010 novel by Chilean author Isabel Allende. It was first published in the United States by Harper Collins.  The book was issued in 2009 in Spanish as La Isla Bajo el Mar, and was translated into English by Margaret Sayers Peden, who has translated all (except the first) of Allende’s books into English.

Now I realise why Anne Lamott would say that when Isabel publishes a book, everyone will write like her: I have simultaneously listened to Hoffman’s The Dovekeepers published more than a year later, and although a wonderful book, it has many elements, expressions, similar plot and style that I cannot qualify otherwise than willingly or unwillingly inspired from The Island Beneath the Sea.

The audio book is well done, actress Epatha Merkerson reads the book to perfection. This is one more thing I love about Isabel Allende: she does not go cheap when selecting the publishing house or the readers for her books; she kept the same translator, consistency that paid off, as “traduttore tradittore”.  The language has the same sweetness, the same powerfully gripping yet friendly vocabulary and structure.

Isabel intertwines the history of Haiti, at the time of the Haitian Revolution, the Immigration en masse to Louisiana and New Orleans, the abolition of slavery and the Catholic influence with family and romantic plots seen through the eyes of a slave.

“In the relatively tolerant religious milieu of antebellum New Orleans, Haitian immigrants joined with Creole slaves, free blacks, and even whites to assure the religion’s ascendancy. Through Vodou, practiced in secrecy, Afro-Creoles preserved the memory of their African past and experienced psychological release by way of a religion that served as one of the few areas of totally autonomous black activity.” (Haitian Immigration: Eighteenth and Nineteenth Centuries)

We learn about the outcome of the revolution in Saint Domingue (original name of Haiti) and Toussaint L’Ouverture, as Zarité (known as Tété- one of the African beliefs being that if you disclose your name to strangers, they can harm you in many ways, once you’ve said your name you stand naked) follows it as closely as possible (her beloved having remained there to fight).

The novel touches upon the fate of children born of white (masters) and black slaves, half brothers and sisters not knowing of one another, getting married and having kids. This is reducing a wonderful story in a quite simplistic way.  Isabel actually lets everyone know about the blood relationship, and she manipulates the reader into routing for their marriage. The idea of incest frightens me, so I followed transfixed a masterfully created plot that almost made me change my mind.

The book is pulsating through the passionate and courageous acts of the characters (I’ve come to recognize Isabel’s proud Chilean soul) and is bringing forward important pieces of history (Louisiana being sold by Napoleon to the Americans for mere cents per acre), for what are we without history?!

The Island Beneath the Sea is the after death, which could be Heaven or Hell, depending on your actions during your life on Earth… It’s a book you want to listen to, it will make you appreciate freedom, education, even society, for, corrupt as it is, we’ve come a long way…

If you want to purchase this book or audio book from Amazon and support allwords.ca at no extra cost to you, please click on the link below.