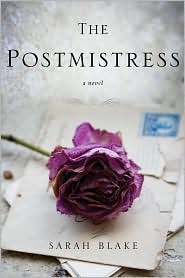 This time Penguin Audio hired Orlagh Cassidy, thank you! “Orlagh Cassidy (born August 17, 1967, Washington D.C.) is an American actress. She made her Broadway debut in Present Laughter with Frank Langella.” (Wikipedia) She played in a few very famous series, short bits mostly (one of them being Sex and the City). She is great as a book reader.

The Postmistress is not one of the books for women that follow a trend or a pattern. There is no boy meets girl, girl loves boy, they have differences, he goes away, he comes back and then they live happily ever after cheap melodrama repeat that we keep being fed and chirpily clap at. This is a well written, well-read slice of life; a thread where the two ends meet and then go in parallel for a while.

The plot is unexpected; the characters are beautifully portrayed but rough at the same time. The “keep them on their toes” formula for success applies here: I did not wait for my public transportation time, I found every excuse to listen to the book instead, and got annoyed when my family worried.  It is indeed unusual for me to lock myself in the study and listen to a book when they are home. No cooking, no cleaning, no folding or ironing, just listening.

The Postmistress grows on you. At the very beginning, you think: “Great, another WWII, how many of those out there!” and it does not even seem enticing. But then every little action, every face, and every bit of dialogue you discover as not being stupid and that is already a big plus. Also, I kept having the impression that Sarah was reading my mind or at least following me around, for blatant general truths I for sure think, but almost never have the courage to blurt out, kept popping up right when they were happening, and once I even looked behind, it was downright spooky!

Some opinions out there blame the lack of reliability as well as “juicy” details when it comes to the war. I would not label it as a war book, it is not. It’s about characters facing it and having their take on it; more specifically, it’s about Americans seeing the beginning of the WWII in Europe and then USA. It’s the right or wrong; the idea that we’re all together and everything affects everything, life’s a treacherous play that one cannot build a script for.

Many keep pounding “the news” notion how it’s all about news, how one receives the news, blah blah blah or bull, I say. One knows. One can feel it in his bones. There is no news, yes, there is a reporter broadcasting, yes there is censorship, yes she carries a letter all over the world, but all that feels like a side plot to me, it’s the context for the real plot to happen: love, strong, pure, one of a kind, the kind that makes you feel guilty for having it and terrified at the thought of losing.

You should read this book or listen to it. You will cry rather than laugh, but you will get the satisfaction of not having wasted your time. Such is life, such is fate, we dread it, yet we still carry the torch with hope.

Hats off to Sarah Blake, as I was saying, unpredicted.

If you want to purchase this book from Amazon and support allwords.ca at no extra cost to you please click on the link below.