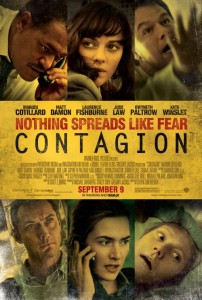 “A thriller centered on the threat posed by a deadly disease and an international team of doctors contracted by the CDC to deal with the outbreak.”

“Contagion follows the rapid progress of a lethal airborne virus that kills within days. As the fast-moving epidemic grows, the worldwide medical community races to find a cure and control the panic that spreads faster than the virus itself. At the same time, ordinary people struggle to survive in a society coming apart.” – Warner Bros.

This movie kept me on the edge of the chair until it ended.  If you are even a tiny bit of a germaphobe like me I do not recommend it. It will keep you awake, it will make you want to wear gloves when on public transportation, call the elevator with your elbow, be obsessed with touching your face or your loved ones touching your face… not good.

Otherwise, an interesting idea that could be valid, a big flame out of nothing as usual, a typical American “I am Legend” type of movie, with a more plausible ending for the heroes though. We almost have a Pleiade of  famous actors, all of them my favourites, a good enough reason for me to see Contagion.

I will most definitely not watch it again,  yet wouldn’t qualify it as a bad movie, just not my kind of movie.