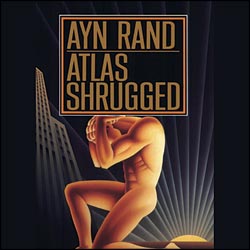 “Ayn Rand born Alisa Zinov’yevna Rosenbaum, February 2 [O.S. January 20] 1905 – March 6, 1982) was a Russian-American novelist, philosopher, playwright, and screenwriter. She is known for her two best-selling novels The Fountainhead and Atlas Shrugged and for developing a philosophical system she called Objectivism.

Born and educated in Russia, Rand moved to the United States in 1926. She worked as a screenwriter in Hollywood and had a play produced on Broadway in 1935–1936. After two initially unsuccessful early novels, she achieved fame with her 1943 novel The Fountainhead. In 1957, she published her best-known work, the philosophical novel Atlas Shrugged. Afterward she turned to nonfiction to promote her philosophy, publishing her own magazines and releasing several collections of essays until her death in 1982.

Rand advocated reason as the only means of acquiring knowledge and rejected all forms of faith and religion. She supported rational and ethical egoism, and rejected ethical altruism. In politics, she condemned the initiation of force as immoral and opposed all forms of collectivism and statism, instead supporting laissez-faire capitalism, which she believed was the only social system that protected individual rights. She promoted romantic realism in art. She was sharply critical of most other philosophers and philosophical traditions.

Rand’s fiction was poorly received by many literary critics, and academia generally ignored or rejected her philosophy. The Objectivist movement attempts to spread her ideas, both to the public and in academic settings. She is a major influence among libertarians and American conservatives.” (Wikipedia)

50 CDs – I have postponed listening to them for the longest time. It took me three weeks. I am sorry it’s over; Scott’s voice had become part of my conscience, grave and calm, stamping my brain with Ayn’s convictions.

Ayn wrote the book in 1946, exactly 66 years ago! I shudder thinking how little we changed, us humans. I am left with the strong feeling that not only I was allowed to see into the past through this magnificent book, but also to screen the future…

It’s true: sometimes the discussions rally along, becoming discourses, circling around the same point, pounding it dry. You can definitely tell that Ayn is stating her beliefs; there is so much substance in the argument to sustain the speeches of the main characters, particularly the positive ones: it would be utterly annoying if you weren’t so scared of the reality described, if it didn’t pertain to the “nowadays” to such a high extent.

No matter how you turn it, corporate world, politics, social environment, family, it’s all there blatantly staring you in the eye. There is no escape, no relief, no better days coming.

There is a sort of doomsday approaching rapidly and undeniably, and having seen the signs, you know there is no escape. The situations are so similar to such an extent that you cannot help being overwhelmed with futility, who are you to change the course of the world, it’s been like this forever, no one will ever change it, let alone you, insignificant bug that can be squashed by any foot…

It’s so easy to associate with the increasing incompetence of nowadays’ life, the lack of knowledge, will, responsibility, courage of thought and action, the disgusting laissez faire of younger generations, the chase for easily gained pleasures, undeserved rewards, effortless living, the unforgiving attitude against the competent and willing and brave… we do live in a world where altruism is considered cunning overtaking or sheer stupidity, unless it’s a must, because you, the one who is able, you have more ability, therefore you are bound to help the less able, the less fortunate. And how infuriating it is when you, the one who works almost all hours of all days are expected to give to the ones who spend their lives complaining about their misfortune and lack of potential, the ones who have the time to string webs, trap you and squeeze you dry, hammer you until you get sick of their conniving plots and are ready to give it all up, because you end up seeing no escape: you want to be left alone to do what you have chosen, to create, to prosper, but you are forced to believe that you owe and you have to pay the fee. You owe to those inept creatures that suck your will by drilling you into believing that it is your fault, you are the one who enjoys working; you have to pay for their suffering, their stifling lack of quality, their laziness. They suffer because they understand as much as your superiority; they use your moral principles, your sense of honour and justice to mount you into their puddle of unending wallowing in self-pity; they gather enthusiasm only to suck up to their bosses, to become indispensable, to be there when every decision is being taken, to be rewarded for your achievement and to throw you under the bus with the first opportunity available… the art of manipulation. And you, who is busy puling stones from the burning fire, fixing the mishaps of their unskillfulness, avoiding disasters and joggling with tasks as you are carrying two, three individuals by doing their work, you have no time to even say hello to your boss, you are frowning whilst rushing around, for your thoughts are too many and responsibilities are piling up, you are in a limbo of constantly having to choose, in a place where one decision is more important than another only in its manner, but equally damaging in fact.

Ayn takes all this globally. She picks a handful of tycoons and extrapolates the greedy cannibalistic, selfish human nature. Mere office talks and simple family disputes are taken into shaping the back fall of the industrial era, the return to horses and carriages after having invented the combustion engine. The characters are the money makers and the decision makers. They happen not to be the same, as the world’s leadership, resulting from the above described undertakings, consists of the weak and stupid, the selfish and hungry, thuds who cannot bear their limited existence and who seek vengeance, trying to eliminate talent, thought, and ability; in fact, the more stupid and incompetent the individual, the more likely for him to climb the ladder and get a management position.

All is fast forwarded and the world is crumbling. There is an avenger, representing the best of mankind and he is there to eradicate all evil, from the very root, as well as bring the world to see and embrace a new beginning, grasp the value of thought, decency, hard work, and genius.

There is only one main character who is a woman. I am sure this is done on purpose, because still oh so true, this is a men’s world! I do not agree with the romantic pilgrimage and liaisons, she is treated like the one and only woman on earth, I fail to find that flattering, but maybe that is the whole point.

I am not going to describe characters, nor get into details about their businesses or lives; you should discover them for yourself. This is a book that challenges your intellect, your moral values and your common sense, I do believe that reading it will make you a better person, or at a minimum, make you see that you are a better person, it will give you a little bit more hope to go ahead, to have faith, to fight, to dream, to act not only react, to work and suffer for your convictions…

If you want to purchase this book or audio book from Amazon and support allwords.ca at no extra cost to you please click on the link below.