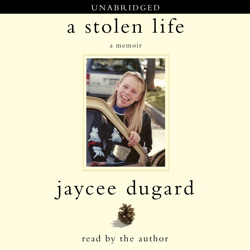 Jaycee Dugard has written this memoir after having been kidnaped at age eleven and kept hostage for eighteen years. The state of California paid Jaycee twenty million dollars as settlement acknowledging the mistakes made by parole officers responsible for monitoring her kidnapper, Phillip Garrido.

This is a true story, and because it is what sells nowadays, it became a hit, of course.

I actually remember seeing the news and being appalled that someone age 29 could live in a backyard and consider herself “kidnapped” whilst going shopping at Wal-Mart, having police come into the house, no real supervision or handcuffs or… the list is incredibly long.

Of course I realised what I am actually listening to about half way through. I would be untruthful if I did not admit that Jaycee reads her book well, it helps that she lived the story, so she gets to be better at narrating than many professionals I’ve heard.

My heart goes to the eleven year old who went through the atrocities half described in that book. I bet you many pedophiles and perverts of all sorts use it as their bible. But I just cannot shake the feeling: she did not struggle, she did not scream, fight, nothing. I was ten and the guy was my parents’ friend and still I escaped, then I had to protect myself for seven more years until I left for University because my parents did not believe me, I can tell you that I would have ripped that guy’s skin off with my bare hands and teeth, one of us would not have made it alive had he tried again… Well, I guess that is what it takes, and Jaycee did not have it. So she stayed there with the rapist and his wife and mother, had two daughters with him, raised cats and dogs, behaved like a little obedient whatever and waited it out until the rapist, check this out: turned himself in.

I don’t know how to rate this: the American way?! I am not jealous of her literary success or her twenty million, she did suffer a lot, but it bugs me when she is presented as some sort of a hero, really?! Well I guess you see all sorts and again heroes sell nowadays.

The language is puerile and not worth mentioning. I listened to the whole thing as it related to me and I wanted to remember the terror of what could have happened, but this is not the type of literature I would pay money for. Yes, beware, your kids can be kidnapped, terrible things can happen to them if you loosen your watch, things that will affect the rest of their lives permanently, be scared; but also teach them to defend themselves, show them what self-respect means, explain the dangers out there: “stranger danger” is not a joke; for crying out loud, to take so much abuse as an obedient punching bag for eighteen years?! I still cannot take that in… and maybe this feeling of incredulity is worth paying for…