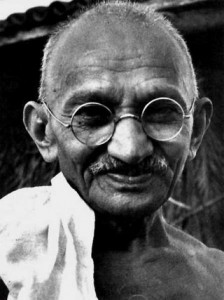 “A coward is incapable of exhibiting love; it is the prerogative of the brave.”

“Whenever you are confronted with an opponent conquer him with love.”

“Love is the strongest force the world possesses, and yet it is the humblest imaginable.”

‘Hate the sin, love the sinner.”

“Whenever you have truth it must be given with love, or the message and the messenger will be rejected.”

“Happiness is when what you think, what you say, and what you do are in harmony.”

“Whatever you do will be insignificant, but it is very important that you do it.”

“You must be the change you want to see in the world.”

“Nobody can hurt me without my permission.”

“Nonviolence is a weapon of the strong.”

“Truth never damages a cause that is just.”

“Peace is its own reward.”

“There is nothing that wastes the body like worry, and one who has any faith in God should be ashamed to worry about anything whatsoever.”

“An eye for an eye only ends up making the whole world blind.”
– Mohandas Gandhi

“Mohandas Karamchand Gandhi (2 October 1869 – 30 January 1948), commonly known as Mahatma Gandhi (Sanskrit: महात्मा mahātmā — “Great Soul”), in India as Bapu (Gujarati: બાપુ bāpu—”Father”) and Jathi Pitha(father of the nation), was an advocate and pioneer of nonviolent social protest and direct action in the form he called Satyagraha. He led the struggle for India’s independence from British colonial rule.” (Wikipedia)