The Weird Sisters by Eleanor Brown

One, two, three sisters and their story – that Eleanor Brown imagines and has tied up to the story of Macbeth (there, I said it!). I do not have a sister, so I cannot relate in terms of family dynamics and behaviorism, I cannot say if this or that is true. I know someone who has two sisters and the father is a teacher, probably the impact is different for her. All the way through I felt like something is missing, and I wanted it to end, get it over with.

Don’t get me wrong, the book is well written and it dwells on one of my fatal attractions, Shakespeare, as the father of the three is a Professor whose specialty is Shakespeare, and who is beyond passion obsessed with the bard. The three daughters are of course named accordingly: Rosalind, Bianca and Cordelia (Rose, Bean, Cordy). They find themselves reunited under the childhood roof and try to sort out their lives (they’re all in some trouble, that’s why they are back) under the pretext of helping their mother going through breast cancer treatment.

I do not think Eleanor has been near a  cancer patient. He 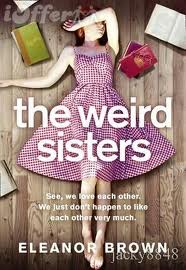 r descriptions are lacking, she did not research much on the hospital routine, nor side effects. She lists and inserts some here and there but nothing someone could not take from Wikipedia. Maybe I am being too harsh, but eight years since my father’s death and ten since it all started, I did not forget a fly on the wall. Maybe this is what makes me too judgmental as well, maybe the idea was not to put accent on it, but it’s crazy to think one can, a cancer patient going through chemo and having breasts cut off does get all the attention, there is nothing else.

And since I’m on the critique bench,  the quotes from Shakespeare did not impress me much. Laudable that we get them, but there were better words in better plays. And again it’s easy to wag your finger and say no after someone had the courage to actually do it, so my sincere admiration for Eleanor trying.

The “we” that the narrator uses, allegedly two sisters talking about the third one, is a great idea if you master it to perfection. Here you no longer know who is talking, you understand that when it’s about Cordelia the other two are talking, except that sometimes they talk about things that they do not know yet, and since (I agree, it is tiresome and annoying to keep repeating “we did not know that yet”) the sentence is skipped, here and there things can get misleading…

The plot is simple but not to be discarded, the resolving of all evils nice and quietly inserted, in a somehow “all is well when it ends well “expected manner, the characters of the sisters are pinned in place, we get three distinct types finely build through past and present, you would like to pick favourites but you cannot as all three have traits that you recognize or admire.

What I absolutely loved about the book is the fact that makes the sisters weird: everything can be solved with a library card. They all read immensely in this family and there is an explanation at one point about how one gets time to read if you do not waste your time flipping through TV channels and complaining that nothing is on, or if you use public transportation, or the waiting time everywhere, which went straight to my heart, as there is nothing I hate more than wasting time, nor anything I love more than reading.

In conclusion: I am not sure I would buy the book. I would not read it again, but it has its merits. I have seen far worse and I am a tough critic, so I will rate it six out of ten…