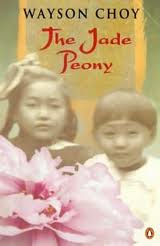 The Jade Peony is a powerful book. I wished I could have found it in an audio format, I would have taken a lot less time to finish it. Nevertheless, the Toronto Public Library offers it as eBook as well, and you can get the electronic version quite easily.

We discussed this book at the book club I’m going to and I was surprised to see that almost half of the attendees did not like it. They found the stories not being strongly connected, too rampant, they disagreed with some of the characters’ short lived appearances and the childish perspectives of the story tellers.

I think The Jade Peony instigates feelings and raises questions, I think the characters’ rational and language are appropriate for their ages, I think the perspective of children having their thoughts revealed is enticing and endearing, for we are all children at heart until the day we die.

There are three stories told and four siblings, the story of the eldest missing from the novel. My understanding is that this fourth story is to be found in Wayson Choi’s Paper Shadows: A Chinatown Childhood, which I intend to read next.

The Jade Peony is extremely interesting as it also offers beautiful uncanny details of Canadian history and of Vancouver’s Chinese community – end of the 19th century, beginning of the 20th century. You learn why they hate Japan so much, how they live together in China towns, how they get to be so connected and strong. Stories from “old China” are particularly fascinating and the author does a great job weaving strong hints of mystery and mystical elements. Even Poh-Poh- the old one, with her hunting for treasures in other people’s garbage bins and her understanding of surreal, her sixth sense when it comes to paranormal, although a harsh strong figure (she imposes that the mother of two of the children be called “Stepmother” by her own children, just because she is the stepmother of the first born son) becomes a dear character. One has to relish this wonderful talent Wayson Choy has, to make you care for his characters, even the ‘evil’ ones.

Day to day Chinese family life at the beginning of the first World War, men who have left China to come work in Canada for money just so they don’t make it back home because of never being able to even get the money for the trip, the ship of bones (dead people who wanted their remains shipped back to China, actually they might not have been allowed burial in Canada), marital abuse, child abuse, child adoption (mainly kids without parents passed on to respectable families and raised by them with no paper trail), ‘paper family’ (those people not related to one another but declared to be so, thus becoming ‘paper cousins’ or ‘paper uncles’), homosexuality, forbidden love, abortion, are main themes that make this book compelling. The fact that all these are discovered through the eyes of three children brings excitement to the journey, as one has to filter and understand the actual magnanimity of the situations.

I believe that The Jade Peony (Poh-Poh’ dearest treasure) is worth reading; I am truly looking forward to meet Mr. Wayson Choy and thank him for this beautiful legacy.

If you intend to buy this book from Amazon you can support AllWords at no extra cost to you by going via the link below:

Choy was born in Vancouver in 1939. A Chinese Canadian, he spent his childhood in the city’s Chinatown. Choy graduated from Gladstone Secondary School and went on to attend the University of British Columbia, where he studied creative writing.

Choy moved to Toronto in 1962, and taught at Humber College from 1967 to 2004. He continues to teach at the Humber School for Writers. He was president of Cahoots Theatre Company of Toronto from 1999 to 2002.

Choy is the author of the novel The Jade Peony (1995) which won the Trillium Book Award and the City of Vancouver Book Award. In 2010, it was selected as one of five books for the CBC’s annual Canada Reads competition.

His memoir Paper Shadows: A Chinatown Childhood (1999) won the Edna Staebler Award for Creative Non-Fiction and was nominated for a Governor General’s Award.

Choy’s latest novel, All That Matters, was published in 2004 and was nominated for the Scotiabank Giller Prize. In 2005, he was named a member of the Order of Canada.

The Weird Sisters by Eleanor Brown