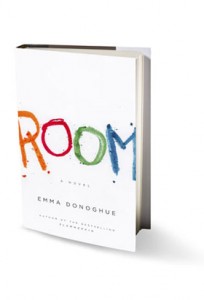 Emma Donoghue (24 October 1969) is an Irish-born playwright, literary historian and novelist living in Canada now. Room, published in 2010, is an international bestseller.

It starts with a five year old talking: Jack. At first you think it is a joke but everything seems serious so you keep on frowning trying to make sense of it all. Little by little you start figuring out that there is a mother as well, and they are both in a room rather small, eleven by eleven; you find out the dimensions when they find out, as they realise how to measure without a tape measure (that would be a waste of the “Sunday treat”).

The intrigue goes on and on, everything seems surreal to the extreme as you discover that the boy thinks the room is the whole world and everything else is “in TV”. His hair has not been cut since the day he was born and he breast feeds. Baby Jesus gives them food and the face of God is to be seen through the skylight. The boy turns five and you are puzzled as per why his mother cannot give him any other present than a drawing she made, drawing he has to hide in Wardrobe, where he sleeps. So you start counting possibilities: aliens? Year 2150 something? No one else on planet Earth which actually does not exist anymore?

Well, mystery solved when “old Nick” appears into the picture. Jack is hidden in the wardrobe and counts his teeth to fall asleep, then counts the squeaking that Bed makes when “old Nick” goes on Bed with Ma. Jack is allowed to go on Bed under “Duvet” only after “old Nick” is gone. Bingo, they are hostages, she has been kidnapped, the boy was born there, he does not know anything else. Intrigue becomes interest as you want to know more, you cannot believe that this is happening and every detail is a crescendo of clues that you are trying to assemble for a better image of the whole puzzle.

Ma’s age is a bit questionable as she says she is twenty seven then later on twenty six, the author forgets a detail specified at the beginning, and the long list of editors thanked at the end did not catch that… Also, once Ma starts telling Jack the “real truth” about what happened, curiosity diminishes and the replacements are not as strong. Emma  could have worked a bit more on the “reason” of all this, “Ma” has been tricked to go into the back of a truck to help a guy whose dog is injured, her excuse being that she was nineteen. I was four and waiting for my mom outside of a shop when a woman (not a man) got close and wanted to take a look at my earrings; I told her straight up that she is a stranger and she should either go away or talk to my mom…

These are small hiccups though. The book is great. The concept gripping. I kept remembering Fowles’ “The Collector”. The feeling it left stayed with me for twenty years. I am not saying that Room bestows the same feeling, nor that Emma is Fowles. There is something special in the kaleidoscopic view Jack’s character creates, everything takes a different meaning, all is twisted and displayed via the language and thoughts of a five year old.

Another interesting aspect is the sparkling advantage Jack obtained by simply not watching too much television (“it rots the brain”) and having his mom’s entire time and attention. The kid can read, count to a million, in fives (it’s easier), calculates and spells the most complicated words; and I do believe it not to be an exaggeration, as children nowadays are so heavily deprived of the parents’ exclusive interest, the latter forced to balance excessively demanding jobs in order to pay bills, as well as abide to society’s more and more bureaucratic standards… On top of everything, consuming more leads to more work or debt, neither favourable to the children’ healthy serene childhood. Come to think of it, it’s a vicious circle that the two main characters avoid by simply being forced out.

Even though, as I said, towards the end it keeps loosing strength in an attempt to level, Room  is up for discussion from many angles and I strongly recommend it. It will shake your world a bit and remind you how precious freedom is and how fortunate you are to have just about anything on top of that…