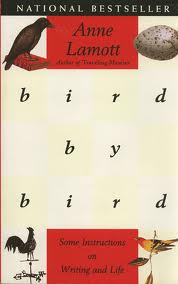 “Anne Lamott (born April 10, 1954) is a novelist and non-fiction writer. She is also a political activist, public speaker and writing teacher. Based in the San Francisco Bay Area, her nonfiction works are largely autobiographical. Marked by their self-deprecating humor and openness, Lamott’s writings cover such subjects as alcoholism, single motherhood, depression and Christianity.

Lamott was born in San Francisco, and is a graduate of Drew School. Her father, Kenneth Lamott, was also a writer. His death was the focus of her first published novel Hard Laughter. She has one son, Sam, who was born in 1989 and a grandson, Jax.

Lamott’s life was documented in Freida Lee Mock’s 1999 documentary Bird by Bird with Annie: A Film Portrait of Writer Anne Lamott. Because of the documentary and her following on Facebook and other online networks, she is often called the People’s Author.

Lamott has described why she writes: I try to write the books I would love to come upon, that are honest, concerned with real lives, human hearts, spiritual transformation, families, secrets, wonder, craziness—and that can make me laugh. When I am reading a book like this, I feel rich and profoundly relieved to be in the presence of someone who will share the truth with me, and throw the lights on a little, and I try to write these kinds of books. Books, for me, are medicine.” – Wikipedia

Bird by Bird was recommended to me by a dear friend as well as every other book trying to teach you how to write. So I read it. It’s a little thing like a small notebook, easy. The main idea is to take one thing at a time, little by little (bird by bird).

I am at a loss for words now, as even though I agree and cherish many of the truths coming out of this tiny book (not as audaciously nor blatantly laid out as the author boasts), I am furious with the writer. I dislike her profusely, for the character she comes across as is someone I would definitely not be friends with in real life.

It just happened that in the timeframe I was reading this book I was using my public transit, shopping and walking time to listen to The Sum of Our Days by Isabel Allende, as well as Imperfect Birds, also by Anne Lamott. In The Sum of Our Days Anne Lamott is treated as a trusted friend, Isabel goes to her for advice at one point. In Bird by Bird Isabel is treated like a “God forbid” kind of author, mentioned as a threat for Anne’s students who would immediately copy the style and write only like that (one might wonder what type of ludicrous specimens are attending her classes).

In Bird by Bird Anne is talking (if not bragging, true, trying to make a point) about how other people thought she was a good gardener because one of her main characters is tending a garden that she is passionate about. In Imperfect Birds we find the garden and the character: no, I did not think that Anne is a good gardener at the end of the book, although you could say that her mentioning of having only plastic flowers in her garden (who does that?! I think this is one of the tackiest things ever) might have altered my perception. However, in all honesty, there are a few plants mentioned here and there, as well as the way you cut them, scanty information, much less than any gardening guide would provide. The trouble she went through to get that gardening info seems quite superfluous given the result.

In conclusion: I agree, I have no idea if I ever will be published, nor  if I’d ever get there, quite possibly not even after thousands of rejections that would rot my confidence and enthusiasm(see, this makes me smile already, a job as a junior telemarketer I endured once turns this into a breeze). I do know that writing does not pay off and if you’re in for the long run you must be passionate about it. I understand that when my book would be published, there is the possibility that the only person remembering would be my rival, whom I could be exchanging flowers with, those being the only flowers I would be receiving as a reward. I believe, just like Anne, that as long as you are not looking for substantial material rewards and your prize and satisfaction come from the writing itself, you stand a chance. I know it’s not an easy path, I’ve been dreading it for ever since I can remember. I know no one is most probably going to look at my work unless a fluke happens somehow, had I had even my parents (or one of them at least) by my side when I was little, my path would have been entirely different.

I also think that Anne’s teaching is not set in stone, that “de gustibus non est disputandum”(we must not dispute taste), and although I dislike her appearance, her actions, and the way she comes across as a person, I will continue to read her books.

Bird by Bird is worth reading, as it is in fact a small memoir, valuable because of its truthfulness.

I am Canadian by Duke Redbird