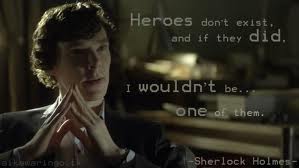 Based on the works of Sir Arthur Conan Doyle

“Sherlock is a British television crime drama that presents a contemporary update of Sir Arthur Conan Doyle’s Sherlock Holmes detective stories. It stars Benedict Cumberbatch as Holmes and Martin Freeman as Doctor John Watson. Six episodes, broadcast since 2010, have been produced, with three more episodes scheduled to begin production in March 2013. The series has been sold to over 180 territories.” (Wikipedia)

The 6 episodes are wonderfully captivating: we have recently found out about the series and have watched them on Netflix in one breath. The characters are charming, the dialogue is witty, the language fascinating. It’s filmed in London and parts of the UK, beautiful! A world of clues and intrigue, irony and humour (black or not), chases and peril, friendship and love surrounds the complicated cases selected by Sherlock. Both main characters are quirky and one learns to cherish and root for them.

This is a show worth watching, I would place it close to Boardwalk Empire and my only regret is that it will take almost one year until we get to watch Season 3.