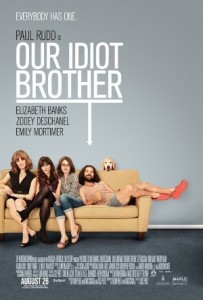 This is the comedy you would watch whilst munching popcorn if you’re exhausted and you cannot do anything else. It’s funny. Family matters are always hilarious when there is an agglomeration, and here we are talking a brother, three sisters (one married, with kids) and a mother.

The brother is the one producing most of the fun as all he wants is to see the good in people,  treat them accordingly, and as a result he is taken for an idiot, stepped upon, pushed aside, laughed at… It’s cute. Paul Rudd makes a good idiot, a fine straight face in comical circumstances.

So, light entanglements that you forget the next day, nevertheless relaxing if you’re looking for some easy escape. You might also get the idea that life is not that complicated after all, that honesty might not be the easy way but it’s the right way. Family sticks together when there is trouble, and even though we 21stcentury humans are so easily inconvenienced, we are not genetically programmed to be alone, therefore not exactly happy as such.