Lean In Quotation of the Week quote Sheryl Sandberg 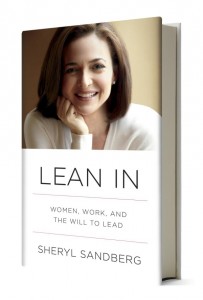 “We shouldn’t call our girls ‘bossy’, we should say they have strong leadership skills.”

“Sheryl Kara Sandberg (born August 28, 1969) is an American businesswoman. She has served as the chief operating officer of Facebook since 2008. In June 2012, she was also elected to the board of directors by the existing board members, becoming the first woman to serve on its board. Before Facebook, Sandberg was Vice President of Global Online Sales and Operations at Google. She also was involved in launching Google’s philanthropic arm Google.org. Before Google, Sandberg served as chief of staff for the United States Department of the Treasury. In 2012, she was named in Time 100, an annual list of the 100 most influential people in the world assembled by Time. (…)

(…)Sandberg released her first book, Lean In: Women, Work, and the Will to Lead, co-written with feminist comedian Nell Scovell, in 2013. It is about business leadership and development, issues with the lack of women in government and business leadership positions, and feminism. ” (Wikipedia)