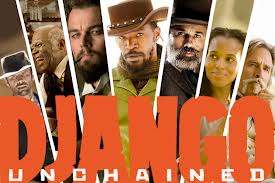 “With the help of a German bounty hunter, a freed slave sets out to rescue his wife from a brutal Mississippi plantation owner.”

Already almost two months playing worldwide, if you did not see Django Unchained yet, do not hesitate. We’re fans and have watched all Tarantino’s movies and next to Kill Bill, this one is my favourite. Less bloody, nevertheless still carrying Tarantino’s flavour in a Wild West manner (rather than Asian), the movie is a hit. Atrocities on plantations, slavery at full peek, bandits becoming sheriffs, sure; the humour is there, black most of the times; there is romance that prevails as usual, and there is Tarantino watching his cast and being one little piece of the puzzle again, can you recognize his character? And forget about DiCaprio and Foxx, who are great, Christoph Waltz is phenomenal and you get to love him dearly.

Enjoy and get comfy before hitting play, I spent most of the time on the edge of the couch and did not even realize it!