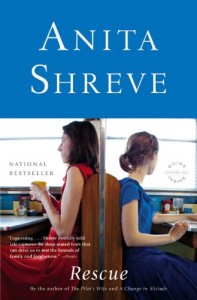 Author of “ A Change in Altitude”, a book that surprised me enormously as unexpectedly witty and real,  Anita Shreve received multiple top of the roof praises for “Rescue”.

After purchasing the book, which I normally do not do, I mean that is why we have such an amazing public library in Toronto, I dug into it giddily and expectantly… I read it. And I kept waiting just like at the cinema when watching “The Adjustment Bureau ” that proved to be no “Inception”.  I can say in earnest that all those famous people and journals praising the book have not read it. It feels like the author was on a deadline, had to deliver something and scoured for parts. I would not be impressed by it even if I were sixteen and tried to find myself in one of the characters. There is no substance, the dialogue is lame, situations highly predictable and the whole thing could have been written in twenty pages to avoid the constant drag.  Now looking at the cover I get even more annoyed as it has nothing to do with the book, the two women photographed could be passing for the mother and daughter, except that they are plain, regular faces, as opposed to the extremely sexy, breathtaking, “oh my God I can’t believe my luck” depicted Sheila and Rowan. Laudable that a guy with a certificate in business decides to become an EMT instead, then get married to keep a child, then raise the child by himself and chase away the alcoholic mother who did not love him, but really? Then daughter, gets drunk twice and he is looking for the mother and finds her right away, daughter jumps off a cliff prom night and is in a comma  but makes it for graduation where they are all re-united and there is the promise of a new beginning… I usually do not disclose the content of the story. This time unfortunately, there is not much to unveil, this book is a casual easy read that stands mainly on Anita’s reputation.

If you intend to purchase this book from Amazon, please click this image and you will be directed there. You will be supporting allwords.ca at no extra cost to you.