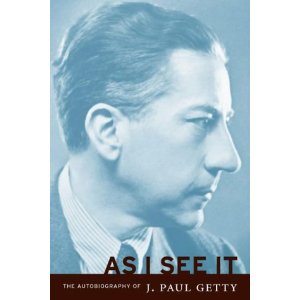 No one can possibly achieve any real and lasting success or ‘get rich’ in business by being a conformist.

In times of rapid change, experience could be your worst enemy.

The employer generally gets the employees he deserves.

There are one hundred men seeking security to one able man who is willing to risk his fortune.

He founded the Getty Oil Company, and in 1957 Fortune magazine named him the richest living American, whilst the 1966 Guinness Book of Records named him as the world’s richest private citizen, worth an estimated $1.2 billion.  At his death, he was worth more than $2 billion. A book published in 1996 ranked him as the 67th richest American who ever lived, based on his wealth as a percentage of the gross national product.  Despite his wealth, Getty was known for being a miser.