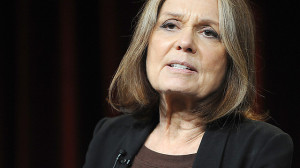 Here is an excerpt I typed and thought you would find interesting:

“When we started we did not even have a word for domestic violence(…) If we think of 9-11 and how many were killed then, more women have been killed by their husbands than people in those three” actions. “I am living the unlived life of my mother. (…) Because I lived in Austria until I was 10-11, I escaped the brainwashing. (…)I grew up in the 50s when marriage was extremely uneven. (…)There was no women’ movement when I grew up. (…)If women didn’t have wombs we’d be fine. (…) The problem is not the individual in the system, the problem is the system. (…) If the only source of scholarship were a beauty contest for men too, men would also parade in bathing suits, because education is expensive. (…) And it’s not about biology, it’s about consciousness.”

<< Gloria Marie Steinem (born March 25, 1934) is an American feminist, journalist, and social and political activist who became nationally recognized as a leader of, and media spokeswoman for, the women’s liberation movement in the late 1960s and 1970s. A prominent writer and political figure, Steinem has founded many organizations and projects and has been the recipient of many awards and honors. She was a columnist for New York magazine and co-founded Ms. Magazine. In 1969, she published an article, “After Black Power, Women’s Liberation” which, along with her early support of abortion rights, catapulted her to national fame as a feminist leader. In 2005, Steinem worked alongside Jane Fonda and Robin Morgan to co-found the Women’s Media Center, an organization that works to amplify the voices of women in the media through advocacy, media and leadership training, and the creation of original content. Steinem currently serves on the board of the organization. She continues to involve herself in politics and media affairs as a commentator, writer, lecturer, and organizer, campaigning for candidates and reforms and publishing books and articles.>> (Wikipedia)