Misha Defonseca Misha: A Memoire of the Holocaust Years Quotation of the Week Surviving With Wolves Survivre avec les loups 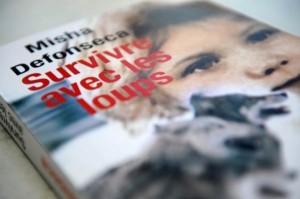 “It is not the actual reality—it was my reality, my way of surviving.” MISHA DEFONSECA

<<Misha Defonseca (born 1937), born as Monique de Wael, is a Belgian writer and the author of Misha: A Mémoire of the Holocaust Years, first published in 1997 and at that time professed to be a memoir. It became an instant success in Europe and was translated into 18 languages. The French version of the book was a derivative work based on the original with the title Survivre avec les loups that was published in 1997 by the Éditions Robert Laffont; this second version was adapted into the French film Survivre avec les loups (Surviving With Wolves).

On 29 February 2008, the author as well as her lawyers admitted that the bestselling book was a hoax, despite its having been presented as autobiographical.

Defonseca was born in 1937 in Etterbeek, a suburb of Brussels, Belgium, to Robert De Wael and Josephine Donvil. Her family was not Jewish, as her professed autobiography states. Her parents were resistance fighters arrested by the Germans. Her father subsequently was forced to collaborate with the Gestapo and was released to live in Germany, dying from natural causes later in the war.

Defonseca and her husband, Maurice, moved to the United States from Paris in 1988 and bought a house in Millis, Massachusetts. He was unemployed by the mid-1990s. Misha began to recount a vivid story about her childhood; wandering across Europe at the age of six after her parents were deported in 1941, being sheltered by friendly packs of wolves, killing a German soldier in self-defence, sneaking into and out of the Warsaw Ghetto, and finally finding her way home at the end of the war. Jane Daniel, a local book publisher, convinced Defonseca to write a memoir about her alleged past after she heard the writer tell the story in a Massachusetts synagogue. Daniel published Misha: A Memoire of the Holocaust Years in 1997 through her “one woman operation”, Mt. Ivy Press.

Prior to the uncovering of the hoax, the book had spawned a multi-million dollar legal battle between Defonseca and the book’s ghostwriter, Vera Lee, against Daniel and her small publishing company, Mt. Ivy Press. Daniel and Defonseca fell out over profits received from the best-selling book, which led to a lawsuit. In 2005, a Boston court ordered Daniel to pay Defonseca and Lee $22.5 million. Defonseca’s lawyers said Daniel has not yet paid the court-ordered sum.

Despite its followers, the book also had many critics who pointed to passages that were logically or historically implausible. The first person who publicly doubted the authenticity of the story was Henryk M. Broder, who wrote a biography about Defonseca in 1996 for the German newspaper Der Spiegel. In late February 2008, a baptismal certificate from a Brussels church for a Monique De Wael and a register from an elementary school near the De Waels’ home that shows Monique enrolled there in September 1943—two years after Misha claimed to have left Brussels, were posted by Jane Daniel on her blog. Belgian national newspaper Le Soir soon reported on these findings. Finally the leading historian of the Shoah in Belgium, the late Dr. Maxime Steinberg, pointed out the historic anomalies and errors in the story.

On 29 February 2008, Defonseca admitted to Le Soir that she had fabricated the tale, after having been presented with what the paper described as “irrefutable” evidence that her story was false. “The book is a story, it’s my story“, said the writer in a statement issued under her real name. “It’s not the true reality, but it is my reality. There are times when I find it difficult to differentiate between reality and my inner world.” Defonseca told Le Soir that she had always wanted to forget her real name because she had been called “the traitor’s daughter.”>> (Wikipedia)