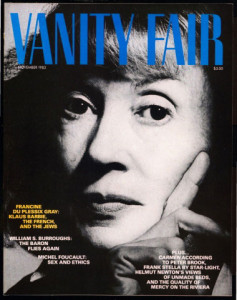 “I write because in the act of creation there comes that mysterious, abundant sense of being both parent and child; I am giving birth to an Other and simultaneously being reborn as a child in the playground of creation.”

“I shall never cease to marvel at the way we beg for love and tyranny.”

She was born September 25, 1930, in Warsaw, Poland where her father, Vicomte Bertrand Jochaud du Plessix, was a French diplomat – the commercial attaché. She spent her early years in Paris, where a milieu of mixed cultures and a multilingual family (French father and Russian mother) influenced her. Her father, then a Sub-Lieutenant in the Free French Air Force died in 1940, shot down near Gibraltar.

Her mother Tatiana Iacovleff du Plessix (1906–1991) had come to France as a refugee from Bolshevik Russia, and ended an engagement to Vladimir Mayakovsky in 1928, before marrying du Plessix. During her widowhood, she once again became a refugee, escaping occupied France via Lisbon to New York in 1940 or 1941 with Francine and Alexander Liberman (1912–1999). In 1942 she married Alexander Liberman, another White émigré from Russia, whom she had known in Paris as a child. (…) He was a noted artist and later long time editorial director of Vogue Magazine and then of Condé Nast Publications. The Libermans were socially prominent in media, art, and fashion circles.

For the first six months in the United States, young Francine lived with her mother’s father (whom she had never met) in Rochester, New York while her mother settled in. She grew up in New York City, and was naturalized a U.S. citizen in 1952. She was a scholarship student at Spence School, where she fainted in the library from malnutrition. Her mother learned she hadn’t been eating the meals the housekeeper prepared for her. She attended Bryn Mawr College for two years, and earned her B.A. in philosophy at Barnard College in 1952.